Robotics hitting the mark for this Co. Armagh farm family

Farming outside Portadown, Co. Armagh, father and son team, Paul and Stuart Lyness’ history of milk production is not a long one, but looking at their farm performance, one would believe they were at it their entire lifetime.

Having entered milk production in 2017, they saw only one route for their farm, and that was robotic milking. Under the guidance of Lely Center Eglish, they installed two Lely A4 milking robots. From the start, it was decided to house the herd full-time and feed silage using a multicut system, with the aim to cut at least 3 times per year to achieve quality forage.

Over the past 3 seasons, the herd has grown to 102 cows, with 87 currently milking. The target is to have 110 cows milking on the two robots at all times, and roughly 20 cows dry, leaving them with a target of 130 cows.

Current farm performance is 34kg of milk on average, at 3.98 butterfat and 3.18 protein. This is achieved from an average concentrate input of 7kg of the high specification, Lakeland Agri Supercream 18% Nut, along with 32kg of grass silage (a mixture of 1st, 2nd and 3rd) and 6 kg blend through the diet feeder.

Last season, the herd sold 9,100 litres/cow on roughly 3.4 tonnes of concentrate feeding, meaning they returned 2300 litres from forage. They also had a calving interval of roughly 415 days, which has since reduced by 2 weeks to currently sit at 401 days. By the end of this year or early 2021, Stuart believes they will hit their target of 10,000 litres sold/cow, which will equate to 3,200 litres from forage as the increase in milk sold will have come without any additional concentrate fed. This significantly highlights the performance capabilities of this herd, and the drive of the management team. 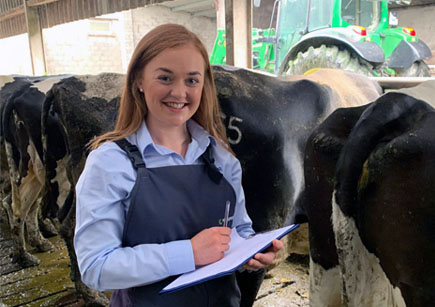 David Beacom, Lakeland Agri Sales Representative and Christopher Cahill, Lakeland Agri Technical & Nutritional Support representative have been an integral part of the team since the Lyness’ conversion to dairy. Over the past 12-18 months the Lyness’ have also joined the Lakeland Agri/Premier Nutrition Transition Management System which entails TMS assessor, Shannon Porter (pictured right), visiting the farm once per month to assess areas such as body condition score, rumen fill, lameness and hock hygiene of all dry and fresh cows and heifers. The TMS programme has helped to ensure that the cows transition well, with minimal disruption from dry cows to milking cows, and subsequently get back in calf earlier.

Stuart had the following to say on their journey into robotic milking;

“By placing a greater emphasis on making quality forage and breeding our own replacements to the highest standards, we have been able to significantly increase the output of the herd over the past number of seasons. We have tried reducing the open days between calving and submission, which has helped reduce our calving interval, something the Lakeland TMS programme has significantly helped with.

The Lakeland Agri team have played a valuable part in our team moving forward. David has been supplying top quality feed since we started milking, and the Lakeland Agri technical team are very involved at regular intervals, running diet plans as forages change and checking in on the settings of the robot to ensure we are achieving maximum performance from the herd. We would recommend them to anyone who wants to maximise herd performance, especially for their knowledge on the robotic milking systems.”

For farms striving to maximise performance through robotic milking systems, we would encourage you to utilise the technical expertise and quality product range available from Lakeland Agri.